skip to main | skip to sidebar

TRAVELS WITH GREASE AND PADDLE 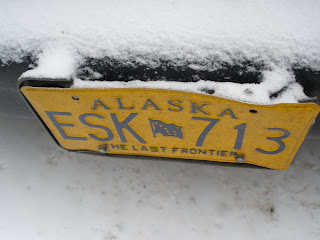 I left the family homestead at 5AM, with a beautiful full moon lighting up the frosted Taconic Valley. The Fried Piper, a 1993 Ford Econoline converted to burn waste vegetable oil, is back on the road for a swing through the northeastern US to visit colleges. I'll be speaking to classes and outdoor clubs about the International Wilderness Leadership School. Along the way, in typical fashion, I'll meet up with old friends and family, have a few adventures here and there, and hopefully eat some tasty regional food.
This trip brings new challenges. Diesel engines are happy to burn vegetable oil, providing it's warmed to 175 degrees or so. The temperature right now is about 5 degrees, making the grease in my Racor filter, pump and fuel lines resemble that bacon fat you left on your counter overnight. So, I start the van on diesel, with the help of an engine block heater, and after radiator coolant heats the grease tank, I flip over to grease in short bursts with the goal of melting the tub of lard that is my fuel filter. Soon enough, everything is flowing nicely.
The real problem will be collecting the grease. Usually I just pull up to a restaurant, obtain permission from someone in the kitchen, and stick my hose in the vat, extracting something that looks more or less like a darker version of the bottle of Wesson oil on your shelf. In this weather it's more like Crisco, which obviously doesn't work for the pump. So I have to hope for a warmer day (at odds with my love of snow) and a restaurant that uses no hydrogenated oil and doesn't fry much meat. Vermont sushi, anyone?
Posted by Nathaniel Stephens at 6:24 AM 64 comments: 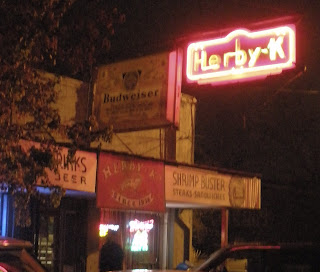 We left Yuma with a new rear differential and camped in Las Cruces. Slim pickins' on grease in El Paso. It was blowing like snot in the desert. Beautiful, windy ride across west Texas to Austin under a big orange moon, past little central Texas towns festooned with thousand of strands of white lights.
Found our old friend, the fiddler Ben Swan, in Austin, and returned to the Continental Club to see Haybale, a great band featuring Merle Haggard's guitarist. Hit up a jazz club downtown before bed.
Easy Austin grease fill-up and north to the town of West, and their Czech stuffed pastries. The kolaches tasted good, but made a solid mass in one's stomach. North some more towards Arkansas, 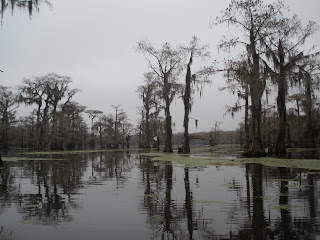 but news of an ice storm steers us east toward Shreveport instead. The road trip arrives at Herby K's, a cajun shack in the abandoned industrial part of town. It glowed like a campfire when we turned down a quiet street, and was better than we hoped. Great cajun food, Abita, internet, fine grease, and friendly people. An idea was hatched to make the most of the detour and paddle Caddo Lake, on my radar since a few years ago, when OK WFR Dave showed photos of deep, dark cypress groves a few hours west of Dallas.
It was a cold and beautiful sunrise paddle through the swamp and a huge push to Bessemer, Al, for a welcome feed at Bob Sykes' BBQ. We drove through a rainstorm and camped in Ft. Payne at the edge of a field. Chicken's night terrors continue, as he wakes up shouting that I am plotting to kill him. He wakes up yelling three or four times a night.
Early morning grease score at a Japanese restaurant in Chattanooga for the big push to DC. Quick stop at Dude's Drive-In in Christiansburg, VA, along the way up the Blue Ridge.
Johnny heralds our arrival in DC with a bunch of friends and jugs of mead.
Posted by Nathaniel Stephens at 6:43 PM 2 comments:

We spend the day in Yuma with the motley crew at Ramco Automotive: a racist business owner/Minuteman, a tatoo guinea pig, a chain smoking accountant, a Native American mechanic, some bikers, and a bunch of truckers gathered for a fried catfish lunch. "You boys don't want that oil, it'll be a brick in the morning. That there is pig fat."
The rear differential is dead, long live the rear differential, en route from San Diego.
Later, we walk down 4th Avenue, America is all its western sprawl dusty sheen. Jiffy Lube, Pizza Hut, Drive-thru Liqour Store, Bob's furniture. Inhale exhaust of a dozen cars, then sewage. Hustle through the intersection. Shopping at the Goodwill, Chicken Dave looking for records, me replacing pants covered in grease from late-night mis-guided marathon mechanicin' session. Christmas carols in the 99 cent store, shoppers pluck through scented soaps and pasta sauce.
Now, encamped at the Yuma Cabana. Hopeful for early-afternoon escape. Chicken plucks guitar, takes my money in Texas Hold-Em. Fluorescent lights buzz along with the chords.

From base camp at the Shea-Lee's, I made some loops east and north. I multi-tasked in Las Vegas, working on the campaign and visiting UNLV, celebrating election night on the strip before driving to Flagstaff. 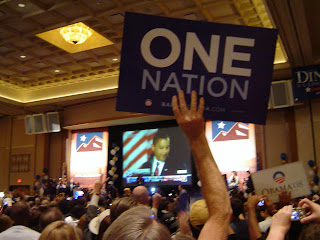 I put a few ads on the internet for people frying turkeys on Thanksgiving and spent Black Friday driving around the city with Kristin to pick up their used grease.
The van has traveled 36,000 miles since the conversion in Haines, all of it on waste vegetable oil.
Today begins the next chapter, a winter cross-country grease road trip. The goal: San Diego to northern New York, with stops in Austin, Memphis, Nashville, DC, NY. It's going to be a greasy, musical exploration of America, with Chicken Dave sitting shotgun. Just gotta keep that grease flowing.....
Posted by Nathaniel Stephens at 7:27 AM 1 comment:

Filling in the edges Autumn 2008 saw the Road Trip bouncing up and down the west coast. After the Olympic Peninsula, we motored south in record time, dropping Hawthorne at the train depot in Chico after a celebratory lunch at Sierra Nevada, complete with fill-up. After some family time in California, it was north again, a return to Oregon for school visits and old friend visits in Ashland and Portland. A frozen bike ride up Mt. Ashland and some cider pressing with the Portland crew were highlights. On a whim, I inquired about grease at a downtown Portland taco shop late one night. Tony said to meet him outside. A door opened in the sidewalk, and in a moment I was in Portland famed underground tunnel system, beneath a strip club, surrounded by 60 cubies of liquid gold! It's not impossible to find grease in ultra-hip Portland, you just have to dig for it.
I left the city with a brimming tank and cruised the coast from Tillamook to Gold Beach, paddling here and there along the way. At Cascade Head, I enjoyed a beautiful afternoon surfing waves in the mouth of the Salmon River, with sunshine lighting up the wind-whipped spindrift above the gorgeous spilling waves.
Crescent City was magic as always, car-camping and paddling from downtown this time. UC Davis, then Chico again, for a birthday morning hike up to Feather Falls and ablutions under a faucet. The grease trail lead to Berkeley that night for a late-night roof top fondue fest.
Posted by Nathaniel Stephens at 6:51 AM No comments: 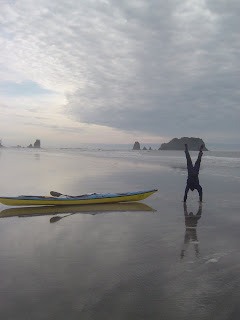 After a successful symposium, Matt and I drove back to Neah Bay, home of the Macah whale hunters, for the purpose a launching another Olympic open coast trip. The people of the reservation were as welcoming as always and tolerated our many comings and goings, which often including a hobo feast in one of their covered public areas. Matt was in a funk, the new VHF radio was giving scary forecasts, and there were a few equipment and logistical items to sort out. But, after a couple days in a holding pattern we broke the eddy of Neah Bay and paddled out in the Strait of Juan de Fuca, reuniting with sea lion friends. At Cape Flattery, when we faced the crux move of cuttting inside Tatoosh Island, the winds dropped as predicted and the swells were manageable. For the next two and a half days we enjoyed every bit of the spectacular open coast between Neah Bay and La Push including beautiful caves and magnificent pillars, survived a hairy surf landing, camped on some stunning beaches and forgot all worries of heartbreak and impending financial disaster.
Posted by Nathaniel Stephens at 10:08 PM No comments:

In Spokane, Headed to Port Townsend 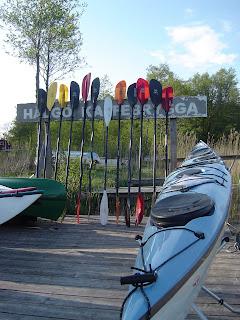 It'e 90 degrees in Spokane right now, where I'm visiting Gonzaga University. Their grease dumpster is brimming and I'm expecting a huge turnout tonight at Wolff Auditorium for an IWLS presentation.

The Road Trip reunites with Matt Hawthorne tomorrow at Sea-Tac airport, then heads to Port Townsend for the West Coast Sea Kayak Symposium, where we'll show off the new Point 65 kayaks. If you're in the neighborhood, come check it out....
Posted by Nathaniel Stephens at 3:43 PM 1 comment: 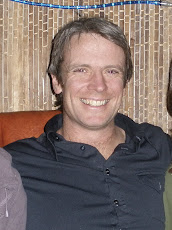